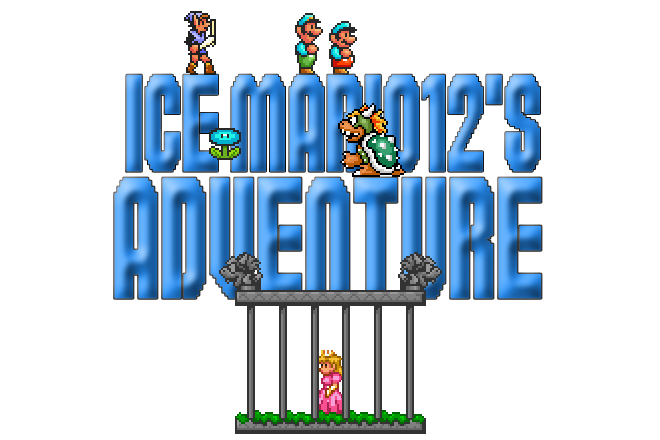 Thanks to Natsu for the logo.
You got it! This is my first project I'm....projecting. I'll try to make this one more
SM3DL-ish. BUT! Mario this time has nothing to do with this! The hero is ME!

Plot:
Spoiler: show
One day, in the forums, there was a peaceful community. Until Bowser kidnapped Peach for the 1792nd time and condemned everybody to the "Adventure Forums". No one noticed a thing, except for good'ol Redigit. That's Bowser's HOBBY. However, Peach sended a letter to a random SMBX Forum Member, Icemario12. When he red the letter (insert annoying help request here), he refused, but when he saw the P.S. behind the letter, it said:

Reading that, Icemario12 took the path to Redigit's house. The SMBX creator greeted him and told him that Bowser's Realm can only be accessed with the 5 Wisdom Stars, scattered through the "Adventure Forums". He gave one of the stars that managed to get to Icemario12. He also warned the member that the "Adventure Forums" were cursed and that all the SMBX members (ALL of them, even the ones that aren't here) got stuck and can't get back to reality. He also said that the kings have the Wisdom Stars and that they will give them to the hero if he'll be proven right. If Bowser will be defeated, then reality to the members would be restored. Will Icemario12 Defeat Bowser and save the day?
Screenshots:
Spoiler: show

New Items! (this is a very long list)
Spoiler: show
- Coin Switch: All enemies are turned into coins.
- Bodyguard Switch: White Blocks appear everywhere. A perfect ammo reload!
- ? switch: Random things can happen!
- ! Switch: All Color Switches are temporarily activated. (Depends on color)
- Red Coin Ring: 5 red coins appear through the level. Collect them all for a power-up!
- Double Coin Ring: 8 red coins appear through the level. Collect them all for a shoe/Yoshi!
- 5 Loots Ring: Turns all yellow coins in blue coins. It's money time!
- Spell Switch: All enemies turn into Goombas.
- Keycased Switch: All locked doors are unlocked periodically.
- Rocket Bazooka: Ahh....nothing better than blowing up enemies with this enhanced speed weapon!
- Brain Boxes: Strange Items that teleport you to a brainy puzzle. There's a timer too! If you make it in time, you'll get teleported to a secret exit.
- Copy Mushroom: If you take this power-up while you're equipped with another one, you'll have,in the reserve box, the same power-up they're currently equipped with. If these conditions aren't met, it will act like a normal mushroom.
- Item's Random Block: Block with multiple power-ups. A roulette.
- Weapon's Random Block: Same as the previous one, the difference? Weapons rather than items.
- Fortune's Block: Roulette that can give you anything!P.S.: Enemies included.
- Orange Bonus Block: Lets you jump high in the skies.
- Orange Hell Block: Lets you drop in hell.
- Yoshi Copter: Yoshi Friend that lets you fly UNLIMITED. A bit glitchy, however.
- Sick Yoshi: Yoshi buried in the ground spitting sick bubbles from his belly.
- Disco Yoshi: Invincible Yoshi that can easily defeat enemies. You can even ride him!
- Robot Yoshi: A Yoshi cyborg hates monsters and bombards them with hammers.
- Player Blocks: Appear after passing through a checkpoint.
- Cloud Flower: Lets you throw floating clouds?! Wow, sweet.
- Light Hammer Suit: Its easier gear enables you to throw hammers farther than the normal ones.
- 1-up Goomba: A Goomba with tastes for mushroom caps that gives a 1-up upon defeat.
- Pit of Trials: Explore these caves and win over enemy ambushes to find a rare item.
- Enemy Battle: Self-Explanatory. Ta-da-da-daaaaaaaaaaa!
- Blue Toad House/Star Square: Challenges!
- Poison Mushroom (Red): Double Speed.
- Poison Mushroom (Green): Appear only in Space and can float in thin air.
- Poison Mushroom (Golden): This one is the "Golden Edition", but it kills you instantly (lol).
- Another Castle Switch: WTF?!?!?!
Worlds:
Grasslands Green Glace
Marine Mountain
Heating Heavens
Frigid Forests
Lethal Lava Land
Wonder World

Like in SM3DL, I'll make 1 Special World for each main world.

Now, I'd need some contributors for my project.

And remember, don't be serious in this episode. Just be creative!

by zlaker
Whoa that's a lot of items in your game. Heck it's more than mine. It seems that this will be focusing on those items kinda like my game huh? Some of them do looks similar. Such as the player block appears after the Chreckpoint. But the game looks good. Good luck

by Eternity
Hey, this isn't looking bad so far! The screens are looking fine, and the design also seems good. The only real problem I found is that the World Map looks a bit too cluttered overall; there's way too much scenery. I recommend removing some of it. I'm also not really a fan of the inside-ground grass on the level screenshot, I would replace it with some SMW-styled ground bushes.

Other than that it's looking pretty neat, though. Nice job!

by anisk
Can i be the beta tester

by icemario12
To Rust (aka Aeon): Thank you for the support. And yes, I'll listen your advices. Thing is, though, I want that the World Map seem SMB3 like. But you're right. Too much scenery!

To anisk: Welcome to the SMBX forums! And of course, you can be a beta tester! ^_^

by icemario12
I'm really sorry I'm late with this, but lately I had a lot of problems I didn't have time for SMBX. However, I'm back! Here are screenshots for World 1-1. It's the first level of the game and of Grassland Green Glace. This is much like a "welcoming level", so...nothing special, introducing our first gimmick of the episode, the Red Ring (the 5 coin version). Also, instead of one bonus stage, why not make multiple stages with one shot?

free image upload
Don't worry, I'll fix the lines in the bonus. And I'd also need another level designer around here.
Have nice days!

by icemario12
Hello? Anybody? Oh, I forgot it's nighttime! In any case, tomorrow, I'll present screenshots from the 2nd level so far. I'm pretty busy now sorting all the graphics for it, so here are some ideas of the level:

So, sweet dreams everybody!

by CreatorForce
Can I Be Beta Tester ???

by icemario12
Sorry for what happened. My family and I were at our cousins' home to celebrate the Easter festivities. But I've still got
a screenie for you, guys. Here it is:
Spoiler: show

by Maruiki
It looks pretty cool. May I become a beta tester?

by icemario12
Great! I'll add you on the list. Lucky you, as I already reached the limit. Wait... actually...no, there are still 2 more places for beta testers.

by icemario12
Urgent news! The project's gonna be in a delay, because all of a sudden my computer stopped working! Therefore, the thread should be left open for the poll, but I must find a way to reopen the computer. That's the bad news, but the good news is that I didn't make too much progress, so starting all over isn't too bad. Until then, have fun with SMBX, guys!

by icemario12
Guys, I'm sorry but...development hell. The graphics, school, everything...I'm sorry. This project is frantically...Game Over'd. Don't worry though. I'm starting a new, smaller one so it can compensate for this. For now though, I'm really disappointed with myself. Could've done a better job. After all, I am a newbie at designing levels, so yeah. I wish you a Merry Christmas and a happy New Year. Joey, or any of the staff...lock this thread.
All times are UTC-04:00
Page 1 of 1
Powered by phpBB® Forum Software © phpBB Limited
https://www.phpbb.com/