by Guscraft808Beta2
is an fan made sequel to super mario bros the lost levels
screenshot: 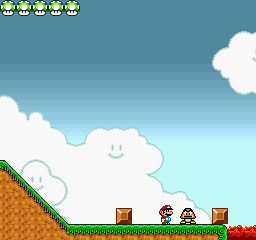 by FireyPaperMario
Question, Is this "Fan-Made" Sequel harder than the original Lost Levels?

by Mr Boboo
What's lava doing in the middle of a grassland?

by Westretroman
I just played this and it's nice and all, but here are some problems that I have encountered.

*The goombas, when stomped, play the 1UP sound rather than the stomp sound, this isn't much of a issue but just a minor error.

*The goombas also don't move, I should mention, and I would also like to mention that the specific dirt ledge tiles before the large grass ledge can not be stepped on in the first level.

*The level after the cavern is nearly impossible to beat, as the big Super Mario Bros. sign blocks the player from making any jumps to other side, I had to get around this by jumping on the block, below it and then proceed to press the jump key and land on the br in bros and then had to make a painful jump from the br to the block and then another painful jump to the goal.

*The level after the aforementioned level above, is literally impossible to beat, above the player is lava and and across from the player was the goal, the problem that I stated earlier with movement is also present here, which means, if you move left or right with just a tap of a key, you will be sent into the ground and if you try to get out of said bug, Mario will jump constantly into the lava ceiling and die, forcing you right back at the beginning of the game, if you are trying to troll the player, at least test to see if they are able to make it out of the trap.

Which brings me to my last problem.

*I don't want to be mean here, but I honestly don't think there was enough testing done to release your first fangame, it's good and all, but the game could've been better, had the issues, mentioned above, were dealt with and not just left alone, if you tested the game thoroughly, without overlooking stuff and thinking that the game is good enough to be uploaded.

That's all I need to say on the review of this, I hope to see this fixed, and I hope you will be able to make more good games.
All times are UTC-04:00
Page 1 of 1
Powered by phpBB® Forum Software © phpBB Limited
https://www.phpbb.com/