by Paper
First battle level posted from me. It's structure doesn't look very appealing, I know, but I was going for a look that would remind you of the original Donkey Kong arcade game, stage 25m. Same goes for the background, or lack of one. It has a few differences (actually, a LOT of differences), and a secret area.

The blue screws contain singular hammers for the secret NPC menu, the item box contains a fire flower (replaces the oil barrel), and there is a hammer suit up top...or is it really the top? 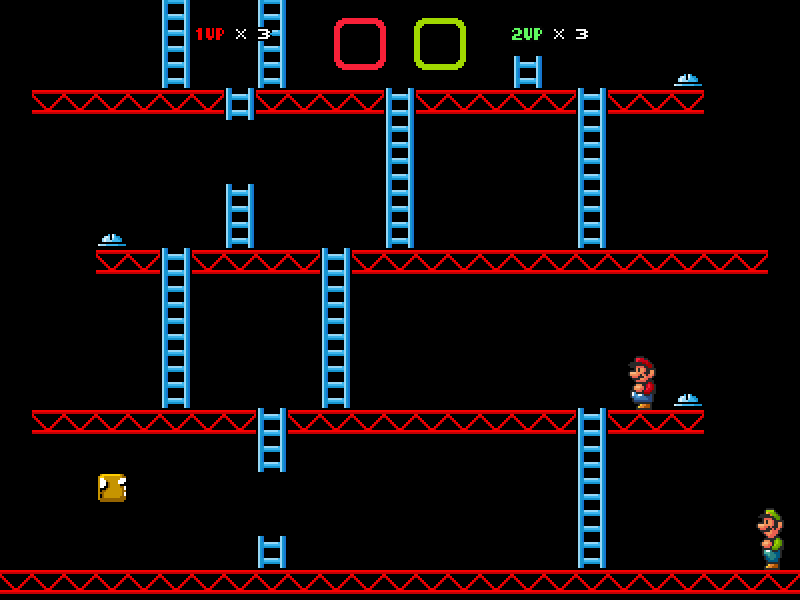 Red girders and blue ladders made by me, blue screws made by Redigit.

If you have any feed-back (including a solution to the fact that the name for the level in the battle level menu shows up invisible/blank), feel free to share it. And, if you really want and can, post a video of you and a friend battling it out on this level!

by Toad5x
Umm I really would like to play this, but there is no .lvl file packaged.

Toad5x wrote:Umm I really would like to play this, but there is no .lvl file packaged.

Really? Let me check...
EDIT: My god, you're right! Let me fix that right now!
EDIT2: The download link should be fixed now.

spaceman2028 wrote:THERE IS NO MUSIC
THE ONE YOU SET UP FOR THIS LEVEL WAS NOT INCLUDED

Well great, I forgot that too. I'll fix it in the morning.

by Paper
Okay, so I checked the file, and it did have the music in it. Check the level in the editor and see if something doesn't match up.
All times are UTC-05:00
Page 1 of 1
Powered by phpBB® Forum Software © phpBB Limited
https://www.phpbb.com/