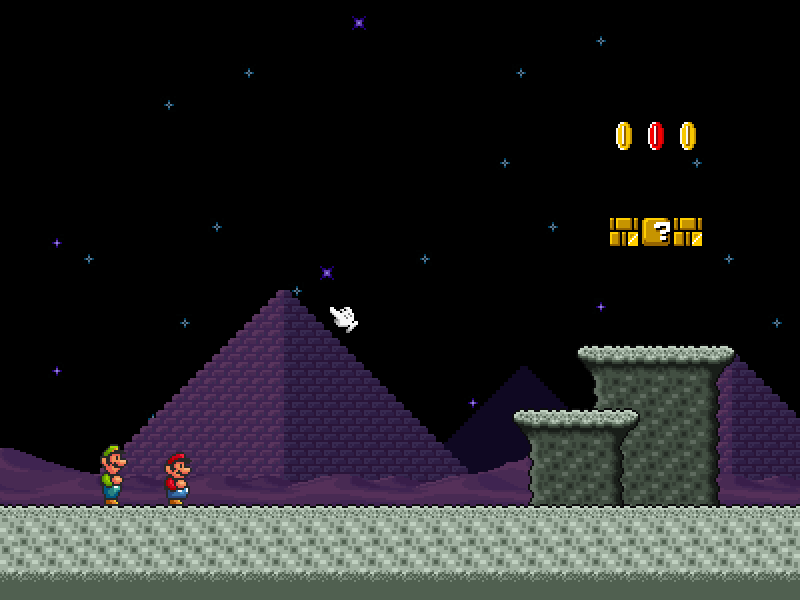 by HVMetal
Hello!
Here comes an:
Unoficial review of Ash Wasteland made by Phazon1111

The level looks pretty nice, altough there is a big lack of BGOs like bushes, cactuses, pyramids or if this is a wasteland then dead bushes or weeds.
Also a lots of areas look pretty flat. For example the area with the block pyramids. A little bit more slopes and piranha pipes would make the level look
more decorated too. NPCs are okay but the flat areas are making team easy to avoid, like the buzzy beetle after the pyramids or some red-para-goombas.
The level was pretty short so adding red coins, especially when the level is very linear, isn't the best idea at all. What really fits to the level is the music.
Its just great and adds the feeling that this is a deserted level. So just a conclusion: Try to decorate the level with some BGOs or add more slopes and pipes to make it look better and so flat. Red coin hunting isnt the best idea when the level is very short and linear because it can be very easy to get them, unless there is some extreme platforming, underwater or switch block maze. There are 3 leafs very close to each other. For example 1 leaf at the beggining of the level and 1 leaf at the middle of it would be okay. Also be careful when placing pipes because they can easily create cut-offs with the ground, in this case the sand.
Example for cutoff:
Spoiler: show And an example for a flat area:
Spoiler: show I give a stable 3/10 for the level beause it's not so bad at all, but needs some work too.

by Aero
The level is pretty short and easy, and is closer to a challenge/special/bonus level rather than a full length level because the only challenge is getting all 8 red coins. It would be much better if it were designed more towards being a bonus level than a regular level. I do like your mix of black, purple, and gray. It really makes the player and NPCs pop out. You should add more challenges because the only challenging to get red coin is the one that needs the bomb to be accessed. The coins shouldn't be in open and easily accessible areas basically. Try burying one of the red coins, or placing them out of reach so that you would need vines or a POW block for, or changing the use of the P-Switch to add a time challenge to get one of the coins.

by hikki_power222
Having only one screenshot attached makes this level pretty doubtful, don't you think?

by Enjl
what does that even mean

Gameplay (60%): 6/10
This was actually a pretty fun level! It reminds me of the World 7 desert levels in Super Mario Bros. 3. There are a LOT of coins, and it's actually pretty fun to try and get them all! However, my main issue is that the level is way too short. Without getting the coins, the level only takes about 45 seconds to go through...I think you should have either added a second section or made the red coins required (although that would require some tweaking). Also, like AeroMatter said, try to hide the red coins in a more diverse way! The most "interesting" red coin was the second one, which requires the player to go over the map.

Graphics/Atmosphere (30%): 4/10
The ash tileset looks nice, but like HVMetal said, there is some cutoff and the level was overall very bland due to the lack of BGOs. I'm not going to elaborate on that because I'd basically be repeating what he said.
I'm also pretty disappointed by the background. If you made the background dark gray to match the tileset, it would really drive home the "Ash Wasteland" feel. After all, that's the name of the level!

Replayability (10%): 5/10
I wouldn't mind playing this level again. It's a short and sweet desert level, perfect for world 2-3 of an episode. However, for me it would just be one of those "come back to this level for free powerups and lives" levels.

A SMB3 desert night-themed level that contains sawnik music. Level design is pretty mediocre, it is not difficult at all and it has one short section, which you could add more sections to make the gameplay more appealing. For aesthetics, it seems to have a lack of decoration a bit, so try adding some. The red coin gimminick is good idea, but like others said, it would be even better if you placed them in interesting way. The pipe cutoff should be fix and hidden P-Switch block should be one tile lower since it's almost impossible to reach it. Anyways, due to short length, there's not much to say about this level, but at least some effort was made, so I'm giving this a 3/10.
All times are UTC-04:00
Page 1 of 1
Powered by phpBB® Forum Software © phpBB Limited
https://www.phpbb.com/