Fortress of the 8-Bits

Fortress of the 8-Bits

by Wolvergrad
First, I hope that I am allowed to post on this forum, I'm a newbie and I don't really know my way around these forums.

INTRODUCTION
This is my first attempt at making a SMB level using the SMBX level editor. This level could be associated with a pilot level of a bigger project that I plan to work on in the near future. As a "story" for this level, The 8-Bits, Wart's minions, have taken over a province of the Mushroom Kingdom and build here a wooden fortress. Mario/Luigi must make his way to the fortress itself, avoiding the traps set for him and defeat the 8-Bits, in order to "recapture" the lost province.

TECHNICAL DETAILS, PLEASE READ
The level itself, despite being kind of short(it has 3 sections, the last being the boss room), it's size is comparable with the third or four castle of SMW. The traps are inspired from the old Captain Claw game, in case you heard about it. Some of them require a bit of thinking, which employs the use of the items scattered in the surrounding.
This level is about experimenting first(with the traps) and then finding a solution to pass it, so don't get mad if you will die once or twice.

Don't be scared, this is by far not a Kaizo level, if I made it sound like that, it could fit in the Medium-Hard category.

The level doesn't contain any custom graphics or sprites, but I made one custom layer/event. It contains two sections, one outside the fortress and one on the inside, and there's also a third one, which is the Boss Room.

SCREENSHOTS
Here are some screenshots of me playing the level. The first three are made in Section 1, and the last in Section 2.
Spoiler: show Anyways, I am disposed to change things in my level if your reviews may convince me to do so.(by posting improvements)

by Enjl
Before I drop some feedback, here's a quick bit of advice: Give your levels a distinct name. I have about 70 Level.lvl files in my folder and replaying levels gets kind of a hassle.

Anyways... this was... nice? It's certainly wacky and unfocused, but the level shows that you have a good grip of the engine and what you can do with it. Even though the challenges aren't polished, they're varied and each area feels different (which, sadly, isn't something I can say about many levels around here). I enjoyed playing the level as a whole.

Anyways, on to more detailed and specific nitpicks/feedback stuff:

You say everything is placed for a reason, yet I have not discovered a specific use for the mushroom block near the volcano lotuses. Going off the phantos warning me about the bullet bills, too, I would've expected traps to come with a warning in form of a phanto. Things like the invisible blocks (good lord has it been long since I was trolled by one of those) and the line-guided grinder could've needed a bit of a warning, for the sake of fairness. If it wasn't for the coins telling me about the vase, I would've had to commit sudoku after missing the grinder.
There's actually other setups which let you show the player what they need to do. I'm gonna go a bit on a tangent in the topic of "show, don't tell" here. Signs addressing the player kind of kill the immersion in the game, so what you usually want to do is convey your ideas through clever placement of your objects in a level. Here're some examples: 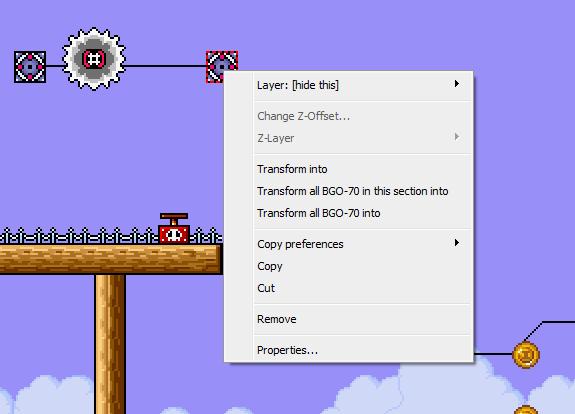 With a setup like this, the player will know that hitting the plunger will cause the grinder to make its way onto the line rail. They don't need to read a sign first. 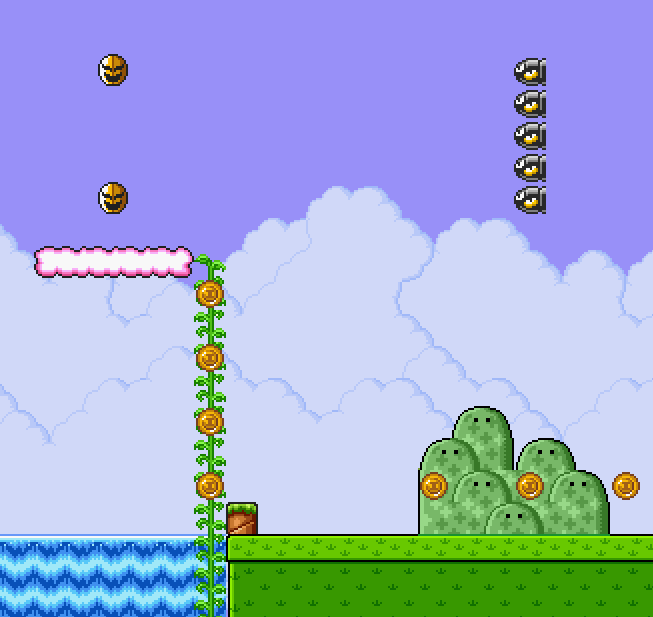 Without the need of a toad, this teaches the player that there are clues for traps laid out by the enemy. It also lets you come up with more complex setups which the player would normally not see coming. Imagine sudden bomb rain once the player passes a certain area.

The boss fight was cool. I like the arena. My only problem with it is the random koopa which sniped me for no apparent reason :v


Wolvergrad wrote:Some of them require a bit of thinking, which employs the use of the items scattered in the surrounding.
This level is about experimenting first(with the traps) and then finding a solution to pass it

I like this concept, but sadly I wasn't really able to find any applications you had of it inside the level.

Anyways. There's my two cents. Are the minions of Wart really called the 8-Bits? I kinda expected either of these 8-Bits to appear (the enemy or the graphics):

Enjl wrote:Are the minions of Wart really called the 8-Bits?

They are. It's in the SMB2 instruction booklet.

by HeroLinik
This one was quite difficult and there were a few kaizo traps in there like that hidden block that killed me a few times, as well as Bullet Bills trying to inhibit your jumps. A video playthrough has been done, after many attempts to complete the level without a single death:

As I showed in the video, it's possible to "cheat" and go underneath the clouds and onto the vine, thus skipping the first Bullet Bills.

by FireyPaperMario
I would love to play this project... But I have work!

by Wolvergrad
First, I would like to thank everyone who took a part of their time to play my level or even watch the video Linik and wrote a review here! It means a lot to me!

@EnjilThank you for spending your time writing me a such detailed review. I have read it, and I'll try to give a reply to some of the things you pointed out in your review.


Enjl wrote:Before I drop some feedback, here's a quick bit of advice: Give your levels a distinct name. I have about 70 Level.lvl files in my folder and replaying levels gets kind of a hassle.

When I started making this level, I thought I'd make it just to get along with the Level Editor, but it turned it out pretty good and posted it here. As for the name, I didn't want then to make a wacky name for it, since I didn't want to post it at that moment, and it remained like that until now.


Enjl wrote:You say everything is placed for a reason, yet I have not discovered a specific use for the mushroom block near the volcano lotuses.

It has an use, but I can't say it on the topic, if you are interested, watch the video gameplay that Linik has put on the table.


Enjl wrote:The boss fight was cool. I like the arena. My only problem with it is the random koopa which sniped me for no apparent reason :v

Yeah, I'm aware of the Red Koopa bug, I used it to test an event, which consisted of the drop of an exit orb after killing the boss. I'll try to fix it somehow. Originally, I wanted to make the boss much harder, with a vine to hang on when the level of the lava rised periodically, but I found that to be too complex for a newbie to make.

Thank you for all the other advice you added in this review, I'll consider them in the future levels.

by Enjl
Just remove the Koopa on the hidden layer :p

E: So the block is to make the jump easier? I see. The jump doesn't necessarily require the block, but I can see it being useful.

Moving this to average btw. Forgot to do that when I did the review.

by Wolvergrad
Final mark?
Btw, can I make a new version and post it here? By new version I mean a few changes and the Koopa Bugfix.

by Enjl
Yes, you can update the download link with a newer version.
I don't hand out numeric scores (anymore). Instead of marking it with a number out of 10 I'd much rather describe this as a "very good first experiment with the editor".

by Wolvergrad
The 1.1 Version Update of Fortress of the 8-Bits is here!
Changelog
- Removed the vine at the beginning of the level, since they could've been used to pass freely from the first trap;
- Removed one of the signs, the one before the skull switch;
- Removed a random mushroom;
- Fixed one of the secret 1-Up Mushrooms;
-Fixed the Red Koopa Bug.

Here's the NEW download link (can also be found in the main post):
http://www.mediafire.com/download/rbzez ... ts+1.1.zip
All times are UTC-04:00
Page 1 of 1
Powered by phpBB® Forum Software © phpBB Limited
https://www.phpbb.com/